Tweet
Share
Share
Pin
You can find our article, Sooner to Profitability – Oklahoma’s tax structure makes it friendlier to cannabis businesses than California, on page 7 of the latest publication of Cannabis and Oklahoma here:
https://indd.adobe.com/view/4f0d5275-0328-46e3-b714-df5d72ca04e4
Reprinted with the permission of Marijuana Venture 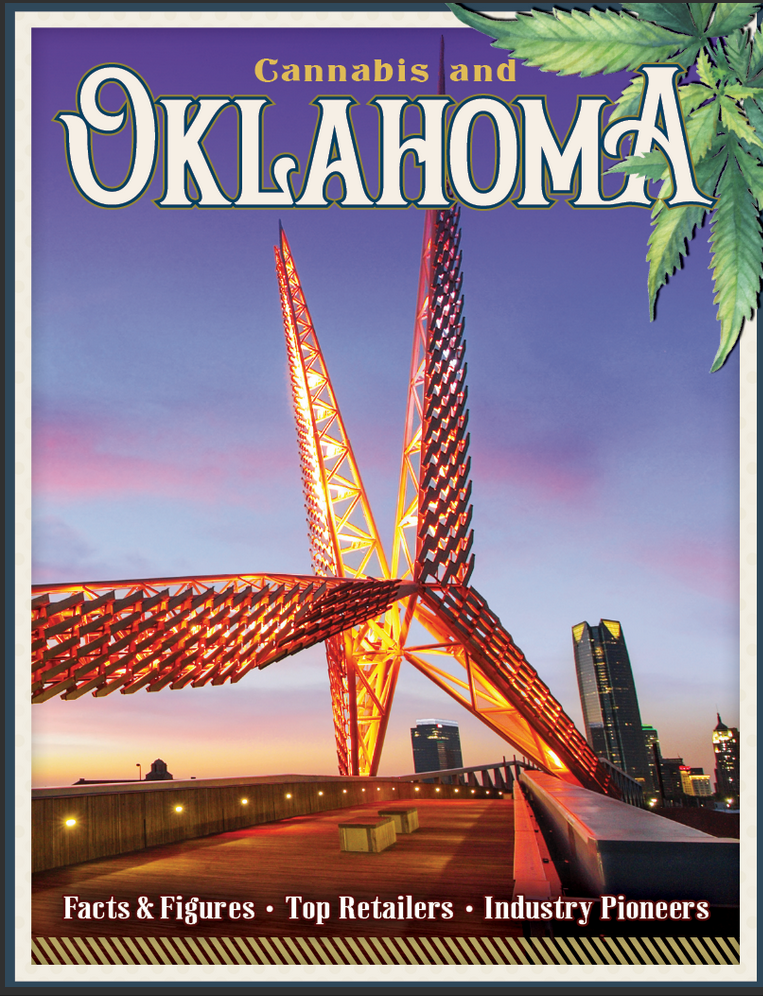 In 1889, the federal government opened up the Oklahoma District’s Unassigned Lands on a first-come, first-served basis. Would-be settlers entered the state at the time and date set by the president and those that arrived at available land first were able to stake a claim and become farm owners.
However, many snuck In Illegally before the official date and hid out, arriving sooner and taking half of the available plots. In addition, there were legal ‘Soon-ers’ who had permission to enter beforehand and had an unfair advantage, including deputy marshals, IRS agents and railroad employees. These Sooners and their property holdings became the subject of long-running legal contests.
But despite Oklahoma’s relaxed attitude toward rule-bending at the start of Its history, It Is now a pretty conservative state.
Oklahoma voters legalized medical marijuana in 2018 under State Question 788. But If you’re caught without a medical marijuana card or with too much cannabis, you are forced to buy a tax stamp at a cost of $3.50 per gram, or close to $100 per ounce.
Though the state of Oklahoma has historically taken a tough stance toward cannabis possession, the Sooner State’s residents have welcomed it with open arms. In 2020, state-licensed dispensaries sold $831 million of cannabis in Oklahoma. With a population of 3.9 million, that’s the equivalent of $210 worth of cannabis per person — almost double that of Califomia at $111 per person.
Oklahoma charges both a regular sales tax and a 7% gross receipts tax on cannabis sales, compared to California’s 15% excise tax. The gross receipts tax is not considered part of the seller’s gross sales and Is exempt from sales tax (unlike California). Therefore, the seller Is not charged tax on tax. These differences significantly reduce the tax burden on Oklahoma’s dispensaries, making it easier to turn a profit.
The gross receipts tax only applies to retail sales, not wholesale. Also, commercial growers can obtain an agricultural sales tax exemption permit (California’s cultivators must pay a cultivation tax of $9.65 per dry ounce.) Oklahoma manufacturers can’t obtain a sales tax exemption permit, but they can get a processors’ sellers permit which allows them to buy marijuana exempt from sales tax.
Another plus for Oklahoma cannabis businesses is that the state has arranged with BancFirst, Oklahoma’s largest state-chartered bank, to accept cash tax payments (for an extra fee) in any of its 107 locations.
Unfortunately, Oklahoma state income fax laws con-form to the internal Revenue Code for both individual and corporate taxation, including IRC Section 280E, which doesn’t allow for the usual business expense deductions like rent, labor and insurance. This leads to a higher state Income tax in Oklahoma than In states like California that allow cannabis businesses the same deductions as any other business.
Although Oklahoma requires Income taxes to be filed in conformity with 280E, the state has a relatively low marijuana tax that only applies at the retail level. This means that it’s a lot easier to make a profit In an Oklahoma dispensary than In a California dispensary, but once you make your profit, Oklahoma will take a higher percentage of it as income tax. Many cannabis businesses that are struggling to become profitable in states like California are trying to survive under a heavy cannabis tax burden.
With a gross receipts tax of only 7% (compared to California’s effective 16% with tax-on-tax) and with no cultivation taxes, It’s not hard to make a case that a cannabis business has a better chance of thriving in Oklahoma than In the Golden State.
Tweet
Share
Share
Pin
The Great Social Experiment: Social Equity in New York Cannabis Taxation in Montana